Imprint and Information for Online Disputes

Information according to Paragraph. 14 of EU Regulation no. 524/2013 (ODR Regulation)

The EU Commission OS platform can be accessed at the link: https://ec.europa.eu/consumers/odr

We can be reached via e-mail address: compustamp@aol.com
Terms and Conditions

CompuStamp has been in business since 1996 offering fine quality postal history items on our website CompuStamp.com and at 12 or more national and international stamp shows around the world every year. 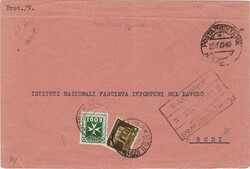