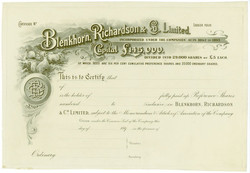 The scottish company was a wollen and worsted cloth manufacturer. Eastfield Mills were built by Blenkhorn, Richardson and Co. in 1882. There the company produced tweeds. While it went out of business in the early 1970s, the building is still existing at Mansfield Rd in Hawick, Roxburghshire. Following the tradition it is now a production facility of Johnstons, a famous textile manufacturer since 1797.
Fixed Price
100.00 EUR
Scriposale
Lot AH34B2088 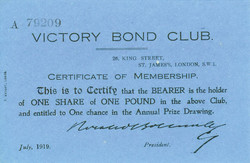 Right after World War I journalist and politician Horatio William „Botty“ Bottomley had the idea to enable investments in British State Loans also for small investors. Therefore he founded the Victory Bond Club and collected about 500.000 Pounds. But, only a small part was invested in such State Loans. The major part of funds was targeted in other investments without success, further 15.000 Pounds Bottomley kept for himself to finance his luxurious lifestyle. When the fraud was shown up he was sentenced to an imprisonment of 7 years.
Fixed Price
50.00 EUR
Scriposale
Lot AS3L666 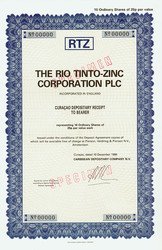 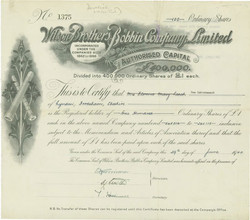 At its peak of production, the company was the largest bobbin and shuttle manufacturing company in the world. It had a fleet of schooners to bring specialised timber from all over the world and to ship the bobbins and shuttles required for the cotton industry to many different countries.
Fixed Price
75.00 EUR
Scriposale
Lot AH46B2089 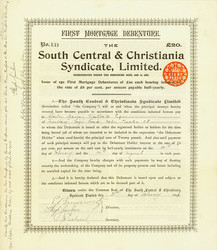 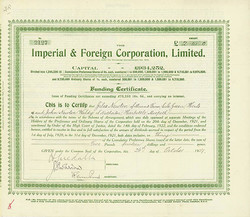 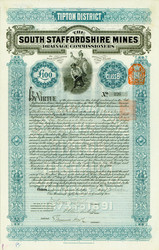 The Loan was raised to improve drainage on various mines in South Staffordshire and East Worcestershire. The repayment was done by a charge on all minerals produced in the area.
Fixed Price
100.00 EUR
Scriposale
Lot AH40B1289 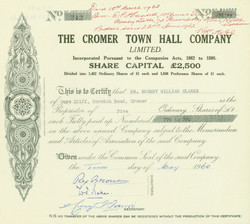 Cromer is a coastal town in North Norfolk, England. Its town hall is a two-storey building with five bays, designed by George Skipper and completed in 1890. Today the building is used for commercial purposes.
Fixed Price
50.00 EUR
Scriposale
Lot AH38L104 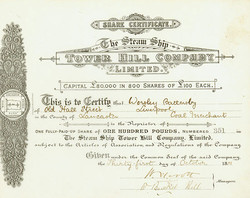 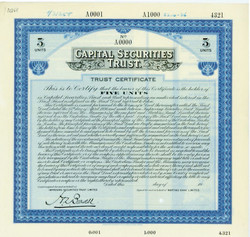 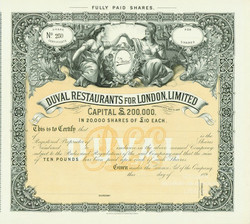 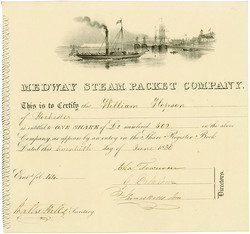 The steamship company was incorporated in 1837. It operated between Chatham at the river Medway in Kent and Sheerness on the island Sheppey at the northern coast of Kent. Business was good until 1860, when Sheppey was connected by a bridge and railway to the mainland.
Fixed Price
410.00 EUR
Scriposale
Lot AH46B2085

The Burgoyne family and the Duke of Devonshire owned the copper and lead deposits of Ecton Hill, Staffordshire. The copper mine was one of England’s richest in the 18th century. The Burgoyne Mining Company acquired the interests from the Burgoyne family in 1838. The mines closed in 1891.
Fixed Price
100.00 EUR
Scriposale
Lot AH34B1850 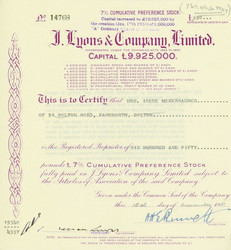 In 1887 the company was founded by Joseph Nathaniel Lyons. Beside being a substantial food manufacturer it was best known for a chain of tea shops. This branch started in 1894 and finally closed in 1981. Between 1909 and 1977 installed "Corner Houses" - large buildings on four or five floors including a food hall, but also hairdressing salons, telephone booths, theatre booking agencies and a lot more. In addition to that the company ran other large restaurants, further the chains have included Steak Houses, Wimpy Bars, Baskin-Robbins and Dunkin' Donuts. The most notable employee must have been Margaret Thatcher: Before becoming a Conservative Party MP in 1959 she worked as a chemist and helped to develop methods for preserving ice cream. Unfortunately this didn't help that much: The company was losing money in the 1960s and was finally was acquired by Allied Breweries in 1978. Falling on hard economic times in the late 1980s the industries were broken up and within the following years sold to other companies.
Fixed Price
50.00 EUR
Scriposale
Lot AH38B1227 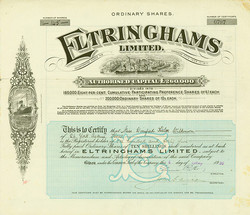 The company was incorporated in 1914, and reorganized in 1919. It bought the wharf in Wellington Quuay, Wallsend, North-East England. The wharf was closed in 1922.
Fixed Price
50.00 EUR
Scriposale
Lot AH26B0378 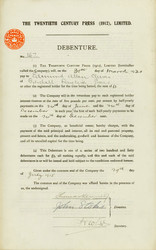 The Twentieth Century Press (1912), Limited was the publishing arm of the Social Democratic Federation. It also published Lenin's paper ISKRA. Lenin shared the companies offices in Clerkenwell Green (London) for some time during his visits in London prior to First World War. The building is now the Marx Memorial Library.
Fixed Price
125.00 EUR
Scriposale
Lot AH46B9067 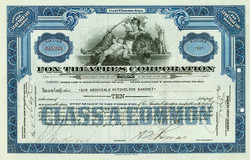 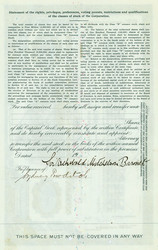 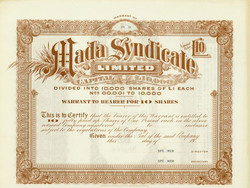 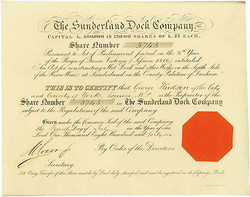 The company was formed to built the South Dock, which opened in 1850. Furthermore it built a colliery railway connecting the mines of Durham with the port. George Hudson represented Sunderland in the House of Commons in 1845.
Fixed Price
125.00 EUR
Scriposale
Lot AH40L156

William Barningham was the youngest of 14 children, his first job was delivering letters. He is said to have been a restless, violent drunkard who survived assassination attempts - anyway he was brilliant enough to build a £40m fortune. Leaving for France in 1843, he found work in an iron foundry in Rouen. After raising enough money he set up a business in Pendleton, Manchester, where he had noticed lots of old rails lying around. He bought them cheaply, re-rolled them, and sold them back to the railway as good as new. Later on he erected an iron foundry in Darlington, which received its first order for rails from the Eastern Bengal Railway Company in 1859. Within a decade, all Indian trains ran on his rails as those in Russia and America did. In 1872 he was producing 80,000 tons of finished iron a year and he was employing 2,000 men and boys in the largest ironworks in the north of England.
Fixed Price
255.00 EUR
Scriposale
Lot AH15B1059 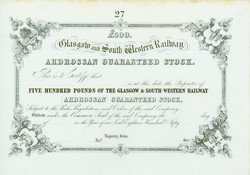 Following an amalgamation the Glasgow and South Western Railway was formed in 1850. It served a triangular area of south-west Scotland, between Glasgow, Stranraer and Carlisle. In cooperation with the London and North Western Railway it was able to serve London. The company became a constituent of the London, Midland and Scottish Railway at the 1923 grouping of the railways.
Fixed Price
65.00 EUR
Scriposale
Lot AH36B0210 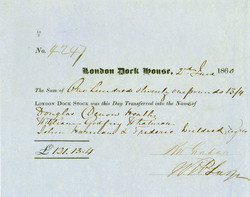 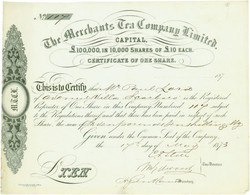 The company was located in Sheffield and makers of steel castings, stone crushers and similar industrial works. Further it made bone mills, coprolite, phosphate and lime crushers for agricultural use.
Fixed Price
255.00 EUR
Scriposale
Lot AH44B1179

The company was incorporated in 1885. It built and operated the 58 kilometres long canal in the North-Western part of England. The canal linked the city of Manchester with the sea and was the longest navigable canal in the world at that time.
Fixed Price
80.00 EUR
Current Time: Friday April 16th 2021 - 20:13 MET