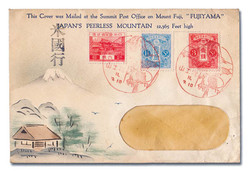 Startpreis: 1400.00
Fujiyama: 1936 (July 10) to California (?), A first day of the year cancellation, on an apparently hand-made window envelope! The cachet (Type II) is scarce enough, with only 36 recorded, but this is the only example we have seen, in person or in the literature, on a window envelope. Our first thought was that a client sent the envelope in, or that Lewis reused one he had on hand (they say he was frugal), but a closer look reveals that the window opening is uneven, the imprints from Lewis' typewriter only show on the inside back of the envelopeand there are a comma and period typed on the envelope front at the far right of the windowall pointing to Lewis, having made an error, cutting out the offending address and creating his own window envelope (he was frugal!). The cover is over-franked with 10 1/2s postage, tied by two nice 11.7.10 Fuji Scenic Datestamps, with the usual "To US" handstamp at left. Combination notation "C-25." and handstamped ") N (" on reverse, along with horizontal double-oval kan handstamp, the handstamps turning to black from blue. Opened along flap. For all of 1936, only 15 covers are recorded from five posting dates., Very Fine, An absolute one-of-a-kind. Estimate HK$ 2,800 - 3,200.
Die Auktion ist bereits beendet.
Unten aufgelistet finden Sie ähnliche Lose aus aktuellen Auktionen und Festpreislisten.
Sie befinden sich in: Aktuelle Suchabfrage speichern
Zurück zur Übersicht